Now is the time: Free your mind to leave the house.｜Tokyo Festival 2020 highlights the appeal of Tokyo's diversity of values. -- Part II --

One of the experimental initiatives being undertaken by the current Tokyo Festival right now is the fusion of the online world with the real world. We asked Miyagi about his uniquely interesting perspective on this aspect.

Read Part 1 of this post: Tokyo Festival 2020 highlights the appeal of Tokyo's diversity of values. Now is the time: Free your mind to leave the house. -- Part I --

The real world and the virtual: A "freeze-dried" relationship?

"This is still really just an experiment, so I can't say for certain that it will go smoothly.
I'm experimenting with the possibility of influencing the physicality of other performers and the audience through virtual methods."

"As an allegory, during Japan's Heian period, people would write letters in order to confide their feelings. Readers would also get emotional or excited by waka poems. Europe didn't have paper at that time. To record something, they used ink on parchment or similar. It required money and labor, so they would sing a song beneath the window of the person they loved. In other words, singing beneath the window was physical, and writing a letter was virtual.
"However, lovers during the Heian period felt that letters were sufficiently physical. Just reading a letter reminded them of the smell of their partner, of the nights they spent together, and so on.

"Technology is one of the reasons that could happen. But in this case, it was just paper and writing brushes. When people smoothly with a brush dipped in ink, their energy state is expressed by the written characters. Whether they feel hesitant about being too bold or they have the courage to speak their mind, the condition of the writer's physical body is expressed in those characters. The reader is able to read that flow of energy, evoking the same physical response in his or her own body.

"I call that 'freeze-drying (laughs). It's like, you just add water to restore it to its original state. Technology was more advanced than in Europe.
"Another reason was the literacy of the letter recipients. During the Heian period, people were trained from childhood to be able to read the writer's flow of energy.

"In other words, the combination of technology and training created a phenomenon in which you could be physically impacted by something as virtual as a letter. That's why I think, from now on, technology and literacy are needed if theater or dance is going to be performed virtually.

"Initially, people don't yet have that literacy, so they probably can't understand the images they are seeing or feel the energy being conveyed. However, with training, it might be possible for even the slightest amount of digital information to evoke a physical response in the brain.
"I believe that such experiments will be conducted by a lot of people during this 'blip in history' moment.

"Naturally, the experience of physical encounters, of bodies encountering each other, will always be important in the performing arts. That's how it should be, and we might see a dramatic expansion in the availability of theater and other performing arts."

According to Miyagi, the biggest secret goal of Tokyo Festival has been training people ever since he took the position of general director. What about training people online?

"The first thing I have to say about my conclusions is that training people is the hardest thing to do online (smiles wryly). That was probably the biggest problem.
"I think a lot of good things can happen in terms of expression, but when it comes to training people, I'm quite frankly worried. We need to think about how we can take care of this aspect.
This is something that's needed not only for virtual encounters, but for real-life encounters as well."

Lastly, Miyagi has a message for the residents of Tokyo.

"Whenever people are in danger, there's a certain way of thinking they seem to adhere to: 'Look for a big tree when you want shelter.' But the truth is that society is fragile, and a wind from one direction can snap it in half. That's how things were in pre-war Japan, when totalitarianism was on the rise.
"Society becomes more resilient thanks to people with diverse mindsets. If you get stuck in a single mindset, your mind will stay home even when it's okay to go out. Society will become fragile if this problem isn't solved.
"That's why your mind needs to be freed to leave the house. Our program is extremely varied. We're provided a clear opening both for core theater fans and for people who have never set foot once inside a theater. Please set foot inside a theater and support the challenge that these artists are taking on!" 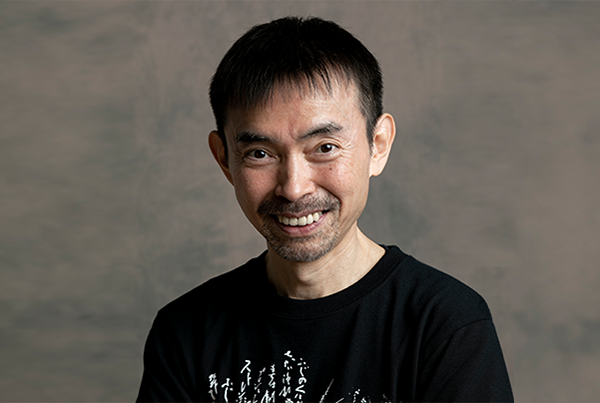 Born in 1959 in Tokyo. Stage Director. General Artistic Director at SPAC (Shizuoka Performing Arts Center). General Director of Tokyo Festival. Studied theater theory at the University of Tokyo under professors ODASHIMA Yushi, WATANABE Moriaki, and HITAKA Hachiro. Established Ku Na'uka Theatre Company in 1990. He has developed a career performing internationally and has been highly acclaimed both in Japan and abroad for performances that combine contemporary text interpretations with the physical techniques and styles of Asian theater. He became General Artistic Director of SPAC in April 2007. In addition to performing his own works, he has been repeatedly invited all over the world to perform works that offer incisive insight into modern society. He also devotes himself to outreach activities and manages theater operations as a "window for seeing the world". In 2017, he performed Antigone as the opening performance at the Cour d'honneur du Palais des Papes during the Festival d'Avignon. It was the first time in the history of the Festival that an Asian play was chosen for the opening, and it became a huge sensation in the theater world. Other representative works of his include Medea, Mahabharata, and Peer Gynt. He was a producer for the creative talent development program of the Asian Performing Arts Festival, APAF (now Asian Performing Arts Farm, APAF) from 2006 to 2017. In 2019, he was General Director of the Performing Arts Division at the Culture City of East Asia 2019 Toshima event. He won a Performing Arts Award at the 3rd Asahi Performing Arts Awards in 2004. He won a Performing Arts Award at the 2nd Asahi Beer Performing Arts Awards in 2005. He won the 68th Minister of Education, Culture, Sports, Science and Technology's Art Encouragement Prize in 2018. He was awarded French honor Chevalier de l'Ordre des Arts et des Lettres in April 2019.
Coverage and editing: KATO Mizuko