Since 1990, the international ivory trade has been banned in principle by the Convention on International Trade in Endangered Species of Wild Fauna and Flora (CITES, also known as the "Washington Convention"), an action spurred by the significant decrease in the elephant population due to poaching for ivory. As a party to CITES, Japan also prohibits the import and export of ivory in an effort to protect the decreasing elephant population.

However, there have unfortunately been reports of ivory being taken overseas from Japan. In response to international movements calling for strengthened control of Japan's markets, the Japanese government is revising laws to place stricter enforcement against the domestic ivory trade.

At the same time, Japan has a history of using ivory in musical instruments and netsuke figures (small sculptural objects used with kimono), and, from the Meiji period onward, as a material for seals, creating an aspect of ivory-related culture and traditional ivory craft techniques. Ivory netsuke figures are highly regarded worldwide for their artistry and are even exhibited in museums overseas, including the British Museum in London and the Metropolitan Museum of Art in New York City.

In response to concerns from within Japan and abroad about the possibility of foreigners visiting Tokyo during the Olympic and Paralympic Games Tokyo 2020 and bringing ivory products home with them, the Tokyo Metropolitan Government (TMG) established the Advisory Council on Regulation of Ivory Trade, a body which is proceeding discussions on the rectification of the ivory trade.

Four meetings have been conducted so far, taking in a variety of viewpoints on the issue of Coexistence between Elephants and Humans in Africa, circumstances surrounding global regulation of ivory trade, comments from artists and business operators working with ivory, and problems arising in the ivory trade within Japan. Wide-ranging discussions have taken place on what Tokyo, as a local government, can do to eradicate the illegal ivory trade.

In hosting the Games, the TMG launched an initiative to prevent the illegal transport of ivory products outside of the country, based on the opinions of the Advisory Council. Since there will be no spectators from overseas due to the COVID-19 pandemic, activities of athletes and related parties visiting Japan are also under restrictions, but Tokyo's implementation of ivory-related measures as it hosts an event drawing the world's attention should provide a favorable opportunity to promote the rectification of the international ivory trade.

The main push of the TMG's initiative is preventing the sale of ivory products that might be illegally taken out of the country, through means that include businesses that handle ivory asking purchasers to sign pledges to not take the ivory overseas, or refraining from selling ivory when such a risk is apparent.

The TMG is also disseminating information in Japan and overseas in cooperation with the national government to prevent ivory from being taken overseas, communicating messages including the fact that such transport of ivory constitutes a punishable violation of the law. 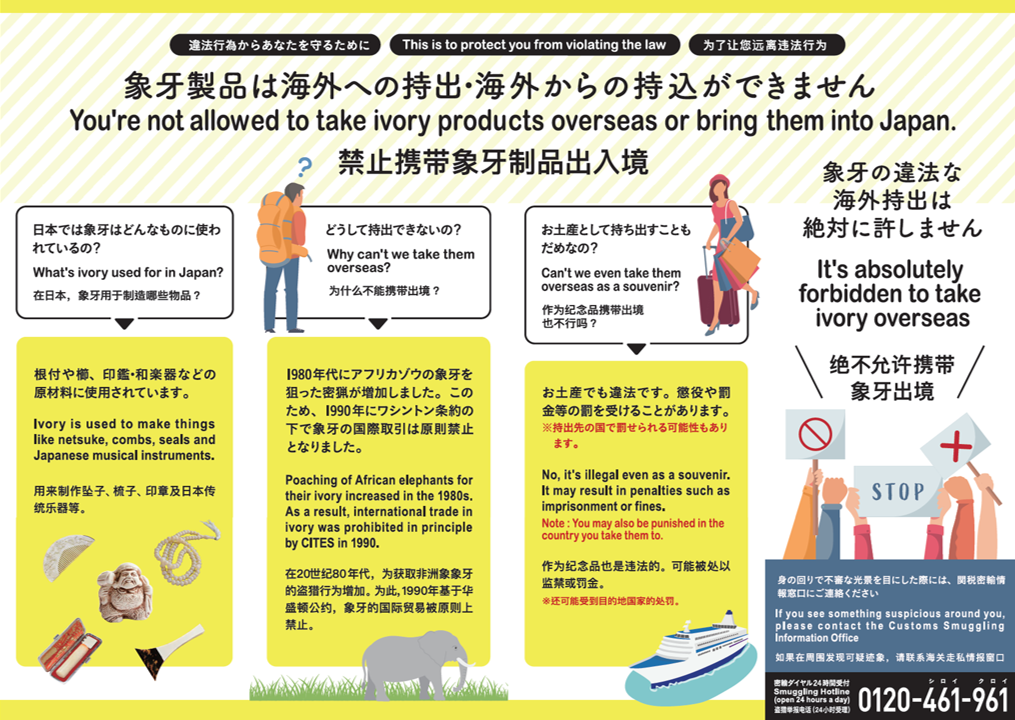 Looking ahead, it will be important that this initiative is leveraged to further deepen discussions in the Advisory Council and that it is connected to further efforts at rectifying the trade in ivory. Through this, Tokyo, a promoter of the SDGs, will contribute to sustainable development on a global scale.