Tokyo is glittered with countless signages, each uniquely beautiful and rich in stories, are awaiting to be discovered. As first issue of TOKYO SIGNS series, we will introduce Nozoki (Peeping) Slope, an iconic location featured in the world-wide blockbuster anime film released in 2019, " (Japanese Title: Tenki no ko)".

Starting off at the foot of the slope, we encounter this sign alerting drivers and passersby, that the slope has 22% incline of tilt angle. This numbered sign indicates the slope being one of the steepest slopes in Tokyo.

Home to this sign, the "Nozoki Slope" is located just 15 minutes' walking distance from the JR Mejiro station in Toshima Ward of Tokyo Metropolitan. The slope starred in the anime film "Weathering with you" as the location of a key scene which beautifully illustrates the victorious sentiment of the leading characters when their new started business soared. In the scene, the shadow on the slope swipes away as the sunlight sparkles through the pristine rain puddles on the ground.

The slope is 520ft in length, and 50ft height difference from foot of the slope to the top of the slope, equivalent of a four to five-storied building. The steep slope is not for the faint hearted, especially for people afraid of heights. Many people only dared to peep every other step as they walk down the slope, thus crowning the name "Nozoki", which stands for "peeping" in Japanese. When one tries to walk up the slope, their calves will feel the load from steepness. While the open blue sky between the buildings at the top of the slope glares so vibrantly that one feels like going for a hike amongst this urban metropolis. 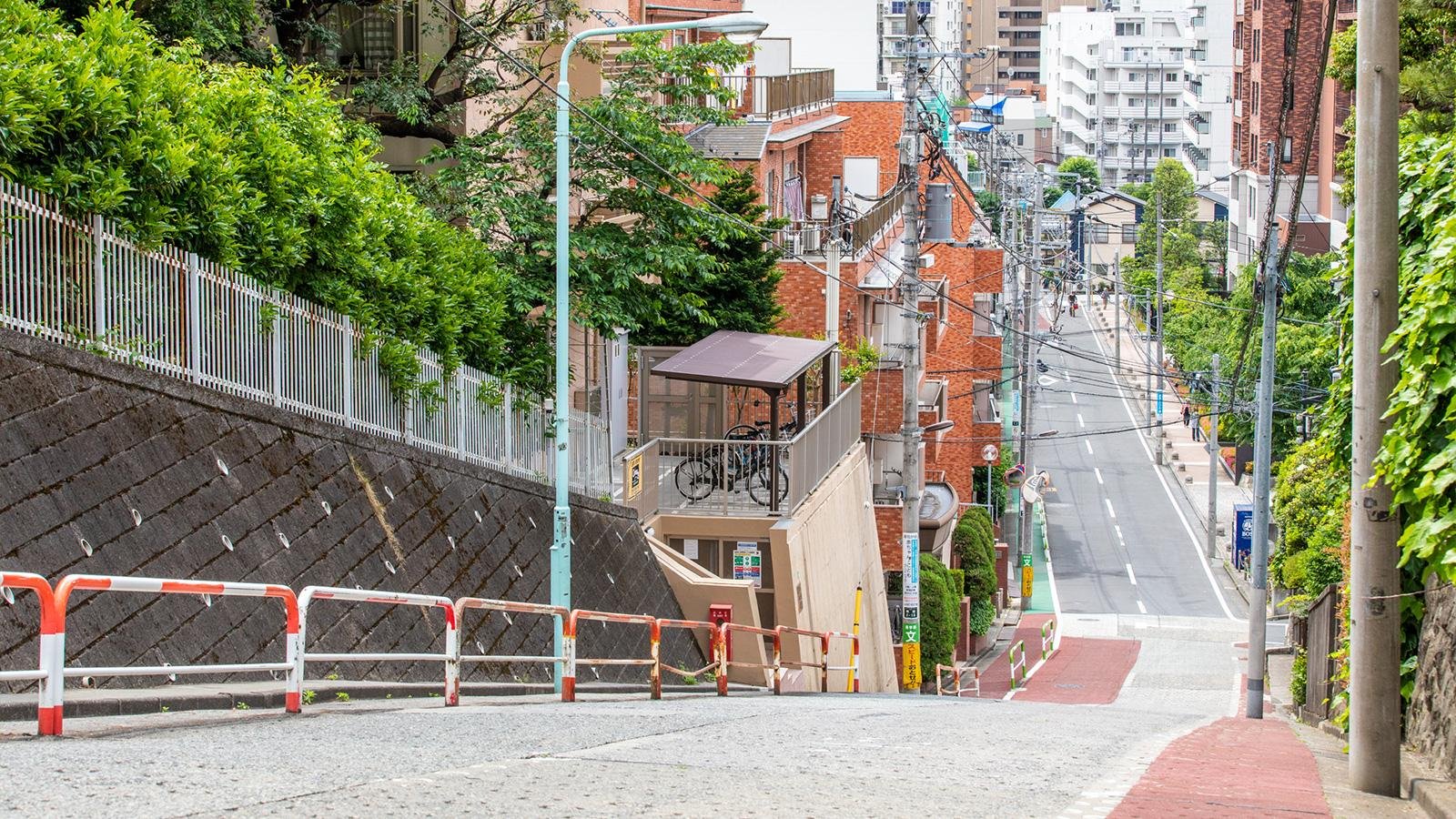 This slope is also rich in history. A samurai named Masaoki Buzen-no-kami Shinmi, who served as a chief envoy for "Treaty of Amity and Commerce between the United States and Japan" had once owned a suburban residence on the side of the slope. Walter Whitman (1819-1892), an American poet, noted Shinmi's visit to Broadway into the following verse.

"Over the Western sea hither from come,
Courteous, the swart-cheek'd two-sworded envoys,
Leaning back in their open barouches, bare-headed, impassive,
Ride to-day through Manhattan."

Although there is no correlation between the fact that a samurai who introduced Japan to the western world in 1920 had once lived on this slope and that this location starred in a Japanese film that earned world-wide recognition, it can only be a destined wonder to find slope with historical background from 150 years ago crisscrossing with a contemporary cultural masterpiece. One of the uniqueness of Tokyo is that Tokyoites embrace antiquity of the city while the old infuses with the new overtime naturally.

The reason why Tokyo is forested with signages is due to Tokyo's geographic diversity. Tokyo is consisted of plateau split by rivers, bountiful of interlaced hills and valleys. Slopes became landmark for people to identify and share the location, and therefore unique place names, such as "Nozoki (Peep) Slope" became part of Tokyoite life.

Until this day, there are still 640 of the slopes with the unique name named in Edo and Meiji era, within Tokyo 23 wards.

Beside of the extensive development that went into the making of "Weathering with You", it is the film's generosity in showing the traditional scenery of Tokyo naturally intertwined with the freshness modernity that made this film unique. The one-of-a-kind atmosphere portrayed in this film is destined to influence the many more that follows.